NOTICE:  There are two posts today – Hamburg and Southampton, in which I’ve included a bit about our cruise.

The Queen Mary 2 docked early in the morning in Southampton.  This was our only stop between Hamburg and NY.  We thought about taking a short train trip to Salisbury for the day but the ship was to leave earlier than previously scheduled so we revised our plan and spent the day exploring Southampton instead.

Southampton is the home port of Cunard and the QM2.  A major port on the south coast of England, it has many remnants of the old walls and gates begun in the late 12th century. 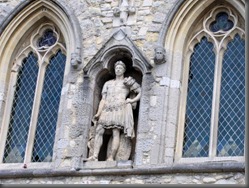 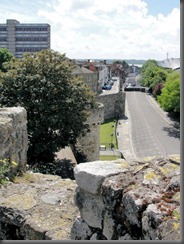 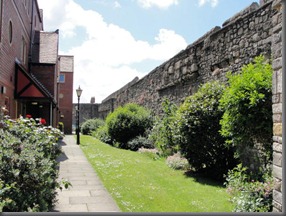 Originally the river came right up to the edge of these walls.  Land has since been reclaimed in order to build up the port.

The citizens were ordered to build the walls on their own dime (or their own farthing?), so to save construction costs many incorporated the existing walls of their houses into the town wall. 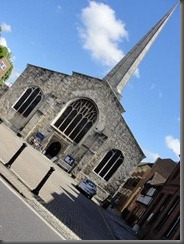 Because of its port, Southampton was intensely bombed in WWII.  Many of its sites have been rebuilt but this church, St Michael’s, came through intact because the Germans needed it as a landmark for navigation.  Luckily this 15th century Merchant’s Tudor House was across the street from the church and escaped the fate of most of the city.  It is being restored and will open this summer.  I would love to see inside but we’re here a month too early!

Jane Austen lived in Southampton from 1807 to 1809.  Her family’s home was on Castle Square where this pub is now.  The square got its name from a long gone mock gothic castle that was built there. 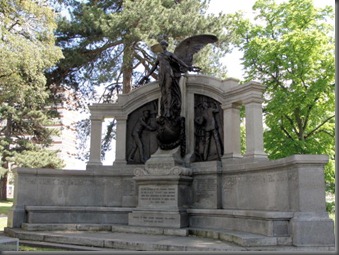 This is a memorial to the Titanic.

Southampton has several pretty parks in the middle of town and the weather was perfect to view them. 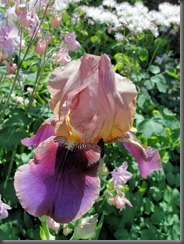 This is a small memorial park dedicated to the Huguenots. 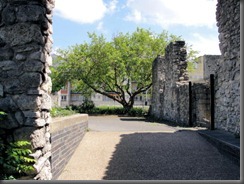 Exploring these bits of ruins and a few colorful cafes and pubs made for a pleasant day in Southampton.  It was a little taste of England even though we couldn’t find a tea shop!  We settled for fish and chips in a pub instead. 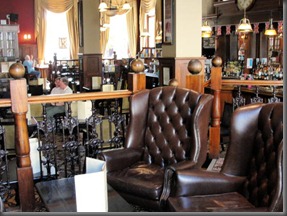 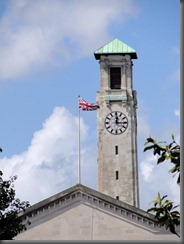 I love the name of this restaurant.  We could use it in Seattle. 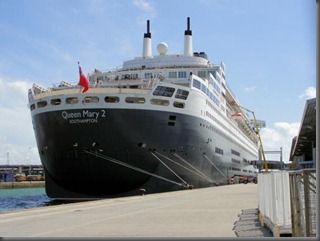 Here are a few shots of the Queen Mary 2.  Although it’s a huge ship, the public spaces are scaled to comfortable sizes.

Our “cabin” and the main dining room. 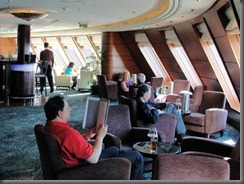 The main lobby and the Commodore Club, one of the bars.  Most all spaces serve several purposes – this is a nice spot to read during the day and it’s a bar with live music at night. 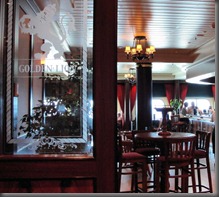 This is the Chart House Bar and the Golden Lion Pub.

There are two large theaters.  One of them doubles as a planetarium; they had four planetarium programs on this trip.  There are a number of speakers each day.  We heard presentations on maritime history, art history, the film industry and my favorite – a rocket scientist talking about space exploration.  There have been four classical piano recitals besides the nightly entertainment of singers, dancers (with a 21 piece orchestra) and a comedian.  I especially loved a show they did that included ballet.  A small company from the London Academy of Dramatic Art performed short plays of the Canterbury Tales and Much Ado About Nothing.  The entertainment has definitely been a step or two above the smaller ships we’ve been on.  There’s something for everyone – dancing classes, bridge, movies, a nice library and 3 swimming pools, one indoors.  A special event one afternoon was an interview with Roger Daltrey of the Who.  He was a passenger on the ship!  He also performed a few numbers and sang with a small band.

We had several foggy days which kept the ocean calm and the ship’s fog horn busy.  Our six days at sea passed by pretty quickly!

Gracia's Travels is a photo blog. I always take too many pictures on trips so I justify my compulsion with this blog! The blog is mostly photos - they tell the best part of the story. Please contact me if you would like to use any of my photos.
View all posts by graciamc →
This entry was posted in England, Southampton and tagged Cruising, Parks. Bookmark the permalink.